Bede Draper (MSc) was born in New Zealand in 1955. Raised on a farm Bede’s upbringing was not uncommon, albeit was quite privileged. Bede was fortunate to be raised in a hard-working family, with good traditional values. As a young man he spent some years in a Roman Catholic Religious Order, studying for the priesthood. His interest in spirituality, philosophy and psychology was greatly strengthened by this experience.

However, happiness and peace of mind was always a problem for Bede. He was unhappy and disturbed within himself, feeling the common angst shared by many these days, and in particular men. Bede always felt that in terms of life he wasn’t getting something. If there was a right way to live life, he had certainly not discovered it.  This unhappiness lead to a deep curiosity around the meaning of happiness, resulting in Bede actively trying to learn and understand where it stemmed from.

Bede mostly tried to deal with his life by reading books. He was good at reading and he loved to come to an understanding about the different spiritual, psychological and philosophical books he read. Being absorbed in books was a welcome distraction from the all-important issues in his life, which he wasn’t facing or dealing with in effective ways.

Married at 26 and father to three children, by the time Bede was 40 years old he was under the sway of alcohol dependence and suffering from all the difficulties that go along with this form of addiction. One thing was certain, he could no longer deny to himself that the way he was living his life just wasn’t working. Something obviously had to change.

At the age of 42 he gave up alcohol entirely. Bede went on to University and completed a Master of Applied Science and also received some more formal training in different methods of Western psychotherapy. This desire to learn and understand psychology continued to stem from his efforts to try and “sort himself out”.

Regardless of his academic achievements however, it did not mean that he had discovered the best way to live his life. It was good he gave up alcohol but this was not good enough in terms of living a meaningful, constructive and worthwhile life.

By 46 Bede’s marriage was in tatters and he and his wife separated. Even though he wanted to blame his spouse he knew deep down there was something that he was missing. That somehow, he wasn’t approaching this thing called life in the right way. He had the theory but he was devoid of practical wisdom.

At 52 he got married again but this relationship also went downhill. It was strange to him that the types of difficulties and problems he often suffered from (all his life) seemed to follow him around wherever he went.

NONE OF IT MADE ANY SENSE!

So, at 58 Bede saw himself as a spiritual, ethical, psychological and philosophical failure. Life had caught up with him and he was found wanting. His life was, in Shakespeare’s words, “A tale told by an idiot, full of sound and fury that signifies nothing”.

Everything seemed to be pressing in on him from all sides. There was no light at the end of the tunnel. He could not honestly say that he had fought the good fight and lost. But he had certainly lost. 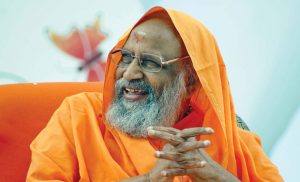 At this time, Bede came across the psychological teachings of Swami Dayananda (1930-2015) a Hindu monk from India. As Bede familiarised himself with Dayanandas’ teachings, it began to give him an entirely new way of looking at himself, others and the world. Bede’s experience began to change and most importantly, the practical changes that began to occur in his life and relationships grew evident.

Bede knew he had discovered something very good.

Bede began to rebuild his shattered relationship with his wife. All the philosophy, psychology and spirituality that he had been exposed to now became understandable in new ways and became very useful. Not only was he now helping himself but found that he could be helpful and make a difference in people’s lives who like himself were doing it hard. Even though Bede was not Indian or a Hindu, he began to play with the idea of going to India and spend some time with this extraordinary monk who was the most remarkable psychological thinker that he had come across to date.

As he became more and more impressed with the teachings of this monk, he knew he needed to expose his mind to this new teaching in much greater depth. In 2014, Bede and his wife packed everything up and headed off to India to study with Dayananda.

Bede spent 14 months studying with Dayananda nearly every day. This remarkable monk was not interested in making people conform to a different culture or religious belief. Rather he gave Bede an approach to see his life in a clear and undistorted way. Dayananda’s approach did not consist in trying to “fix” Bede psychologically (as Western methods tend to do) but rather, showed him how to embrace a new way of living, where suffering is left behind. Further, he unfolded a way of living that enabled Bede on a moment-by-moment basis to come into harmony with himself, other people and the world in which he lived.

What Bede appreciated about Dayananda was his extreme realism. Dayanandas’ insights into the nature of human suffering (unhappiness) and its resolution were extraordinary. Dayananda did not unfold a psychological theory to be learned and applied. Rather, he provided Bede with a method to honestly examine every aspect of his life in order to see the value in embracing A WAY OF BEING IN THE WORLD which is harmonious, meaningful and worthwhile. Dayananda’s vision of our human life entirely demolishes the idea you can feel right within yourself without LIVING in the right way.

When saying goodbye to Dayananda, Bede discussed his intention to develop a new method of helping people with all he had learnt over the last 14 months including the sense he had made of years of study in Western psychotherapy, psychology, philosophy and theology. Bede knew that there was a lot of work to be done, not only in terms of himself but also in pulling everything together that he had learnt in a way that would be useful for other people. After 4 years of work, this was completed in its basic form.

Discovering a WAY OF LIVING that brought him into harmony with himself, others and his world was the crowning achievement of his life. This new way of being lifted him out of the destructive and self-defeating way of living, in which he had been enclosed in for most of his life.

The problem for Bede now was, who was he was he going to work with?

Bede knew that he could not “be all things to all men”. However, he was sure of one thing. His qualifications in helping people was not his education but his best qualification was that he had a PHD in making a mess of his life.

Bede understands what it is like to be enclosed in painful states of mind and feeling helpless before them. He knows all about conflict with other people and all the disturbance that goes along with such conflict.

Upon reflection it became clear to him that his main experience was in “being a man”. He knew what it was to feel a failure as a man. Most of his life he hadn’t known what it meant to be a man and therefore never learnt the ability to be one in the fullest sense of the word. So, he decided to help young men gain the ability to be real men in a world full of adversity. It was this which was going to be the focus of most of his efforts.

As such, ‘Manability’ was born, driven with the purpose to help men in their mid 20’s to late 40’s to: